‘WHEN IN ROME’ Carlton Theatre, Edinburgh, 1987 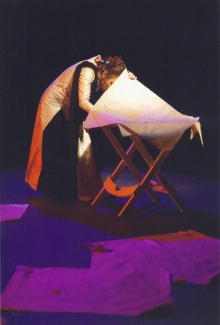 ‘M’DEAR’ commissioned by Out of the Asylum, Xmas Show, Fremantle, 2004

Short Plays –
‘OTHER SIDE OF MORNING’, shortlisted Short & Sweet, 2006

TRANSCREATOR OF PLAYS BY AFEIF ISMAIL

OTHER WORK
I have co-produced several theatre and dance performances in London, Edinburgh, Seattle and Perth. In London I also developed a series of playwriting workshops with Soho Theatre Company; an experimental theatre workshop with ‘louder than words’ theatre company; a series of music in science workshops for schools; and produced Monster Myths, a science/art debate in association with The Wellcome Trust and The Independent newspaper. I was involved in the commissioning and development of new works by Ken Campbell, Jack Klaff, Hilary Westlake & Nicky Smedley.
I have been a board member (Secretary) for Stages (Western Australia) Playwrights Consortium, WA state committee member for the Australian Writers Guild, on the Reference Group and committee for Out of The Asylum Writers Group and Treasurer for Wings Organisation for Cross-Cultural Development. I have been a member of Perth’s Blue Room Theatre production assessment panel, and have been on the Register of Peer for the former Department of Culture and the Arts in WA. I have been invited to judge various writing competitions including the Maj Monologues (Downstairs at His Majesty’s Theatre, Perth), the Peter Cowan Patron’s Prize for Poetry, the Talus Prize for Poetry (Edith Cowan University, WA), and Australian Poetry’s National Science Poetry Prize. I am also a member of the Australian Writers Guild (AWG), Media, Entertainment and Arts Alliance (MEAA), the International Centre for Women Playwrights, and I am an International Affiliate of The League of Professional Theatre Women.